>Mother’s day is not my favorite day of the year. I actually hate it, for the most part. This year might have changed all that. The week before mother’s day I received a potted plant from my mother. It was a Caladium. The cats ate it. They ate it the moment I set it down. I moved the nice pot and the plant to a place where I thought they couldn’t get to it. I was wrong. I found the smashed plant on the ground with the nice pot smashed to smithereens. The cats were quite smug. I gathered all that remained of the plant and put it in a tupperware container. I put the plant outside by the front door, breaking one of the lease rules, and hoped my lovely plant would survive. She is doing alright for now.

On Mother’s Day, I got a hot cup of nothing. I did get a call from my mother and my son, but nothing else. I called my daughter and she was told to tell me happy mother’s day. I was too busy to pout about it.

This past Friday, my son arrives with flowers in hand and a card. I was so blown away by the flowers that I completely failed to look at the card. The flowers were blue. They had to be. My son would have it no other way. My favorite color is blue and therefore nothing else will do. His poor step mother went to 3 different florists looking for something, anything, blue. Not purple. Only true blue would do.

The neglected card sat in my car until this morning. I was waiting for a doctor’s appointment and I saw it. I picked it up and knew immediately that I had to share it with you.
The front says “Mom” and has a picture of him and I that he drew.

The second page is entitled “All about mom.” Here are some fun facts about me, according to my son.

I’ll admit, the last one made me want to cry.

Max then wrote me a poem. I’m sharing it with you. 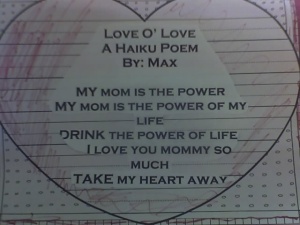 I am not sure how to feel about it. I feel immensely proud of him, but also like a super villian.

DRINK THE POWER OF LIFE!